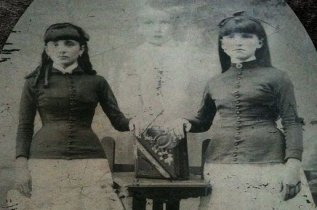 Is it really possible to take real ghost pictures with your camera? Well if you believe in ghosts anything is possible, so why not? The ghost pictures above are some of the most famous ghost pictures ever taken and captured on film. Most are not staged shots attempting to capture ghost pictures, most are simply just snaps taken, which, when returned to the taker appear to show ghostly life forms and apparitions. There are many supposedly real ghost pictures available online however most can be proved as fake as nowadays, with modern image photography, its all too easy to create seemingly real images using imaging software. These ghost pictures are different because they were taken before the onset of digital imaging and have been analysed by the best in the field. Are they real ghost pictures? You decide!

If you want to check out more about ghosts and paranormal content including the recordings of ghost voices using electronic voice phenomena and captured on tape check out our Scary Stuff link below and see what's really on the other side. Not for the faint hearted!

We scour the web every day to bring you
the best free stuff online from free offers
to information and entertainment.

A growing collection resources to
keep you entertained from funny
videos to quizzes.